The 50th Anniversary Celebration of the beginning of The Thud Era.

Members and Guests in Attendance

Arrival & Check in at the Ben Lomond Suites Hotel was mostly uneventful except for the circuitous route required to get the baggage cart to the main elevator, but all seemed to manage without great difficulty.

Except for a few late arrivals, most registrants had checked in by 5:00 pm and had made their way to our Hospitality Room for reunion registration and receipt of reunion packages which included name badges. It did not take long for the room to come alive with greetings, laughter, and conversation.

Gradually, small groups formed and left for dinner at various nearby restaurants. A good number returned to our Hospitality Room to close it down at 11:00 PM. 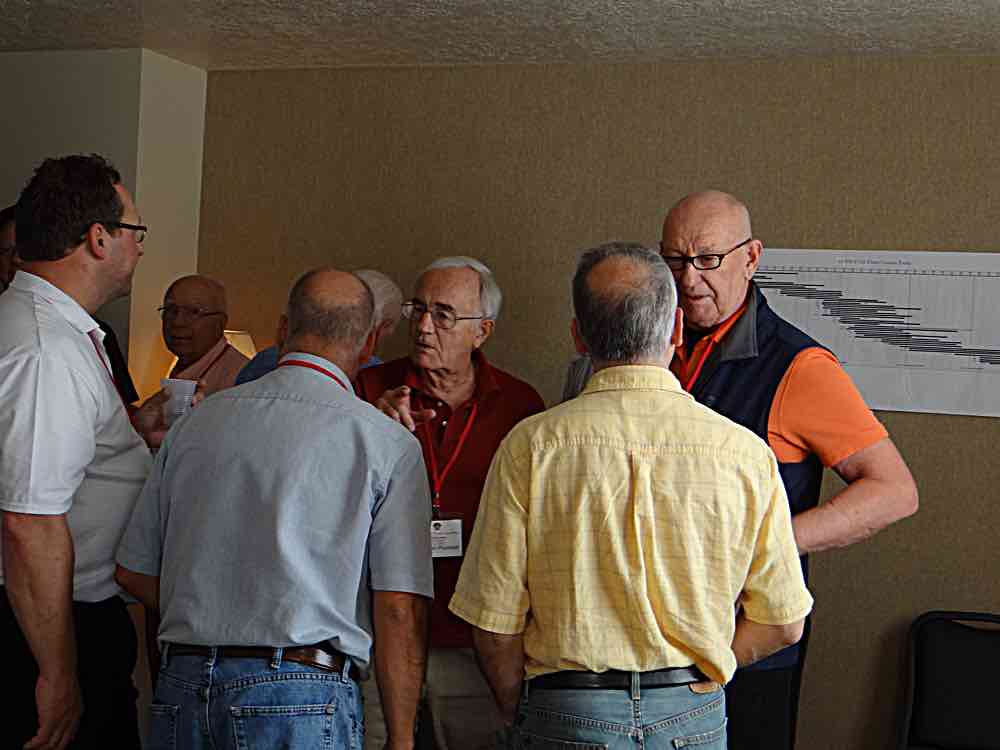 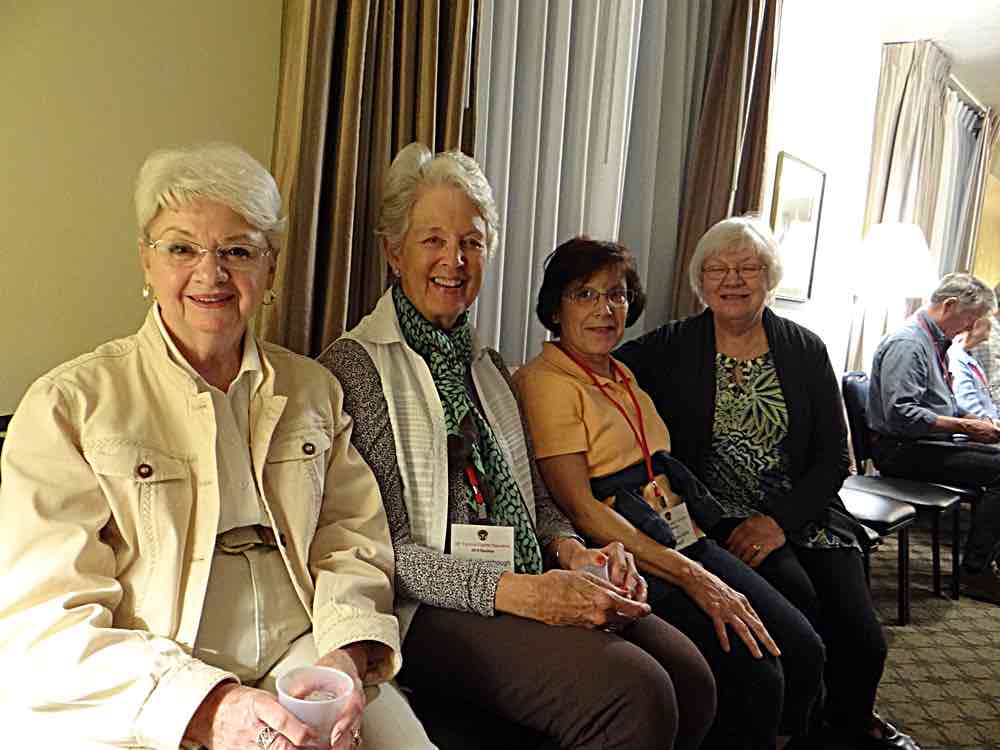 Early Thursday morning, 51 of us boarded our bus for the drive to Ogden’s Union Station which is located on the East end of Historic 25th Street, three blocks from Ben Lomond Suites. Within Union Station we visited four museums: the Utah State Railroad Museum; the John M. Browning Firearms Museum; the Browning – Kimball Classic Car Museum; and the Utah State Cowboy and Western Heritage Museum. Some of us also viewed art works by Utah artists at two galleries, the Gallery at the Station and the Myra Powell Gallery. 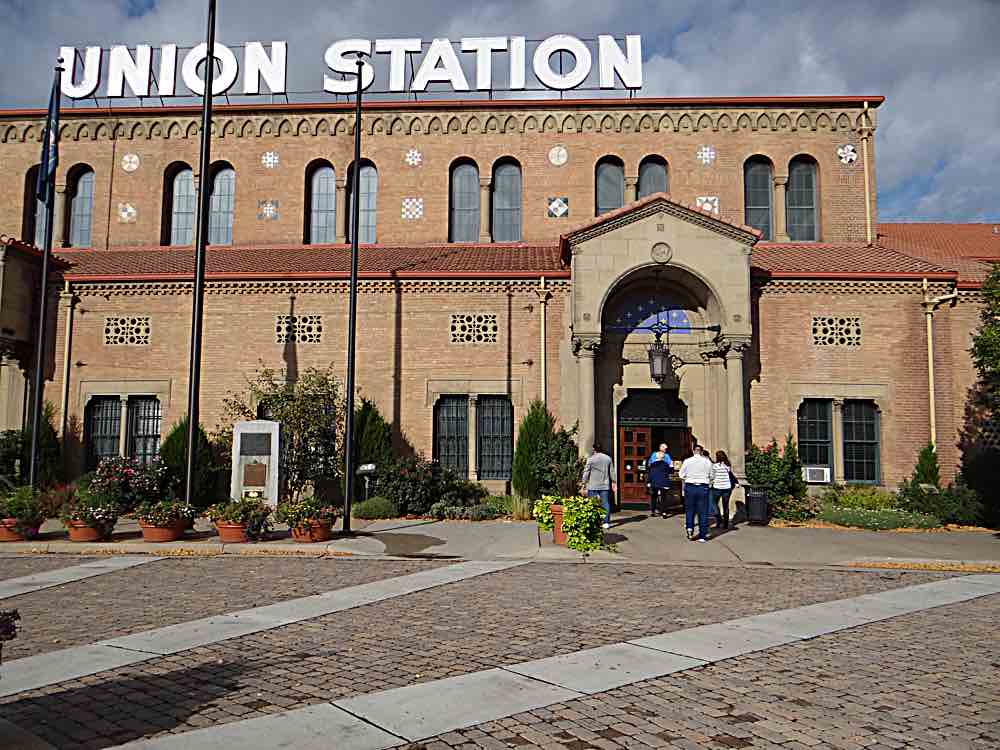 Following our tour of the museums and art galleries, we boarded the bus for a short trip to the Union Grill for our noon meal.

Following our meal, we boarded our bus again for a one hour trip to the Golden Spike Historic Site. After being welcomed by the Park Ranger, we were divided into two groups for an orientation briefing and visit to the locomotive building. Regrettably, due to one of the engineers being on medical leave, we did not see the 119 or Jupiter locomotive demonstrations and photo runs (we were told that the demonstrations were to resume the following day - bummer).

The cold, wet winds precluded some from visiting the site where the golden spike and three others were driven.

At the conclusion of our visit, we board our bus for the one hour trip back to the Ben Lomond Suites arriving around 5:00 PM. During our visit to the Golden Spike Historic Site, Ogden experienced a severe thunderstorm as evidenced by the significant amounts leaves, limbs, and hail on the ground. 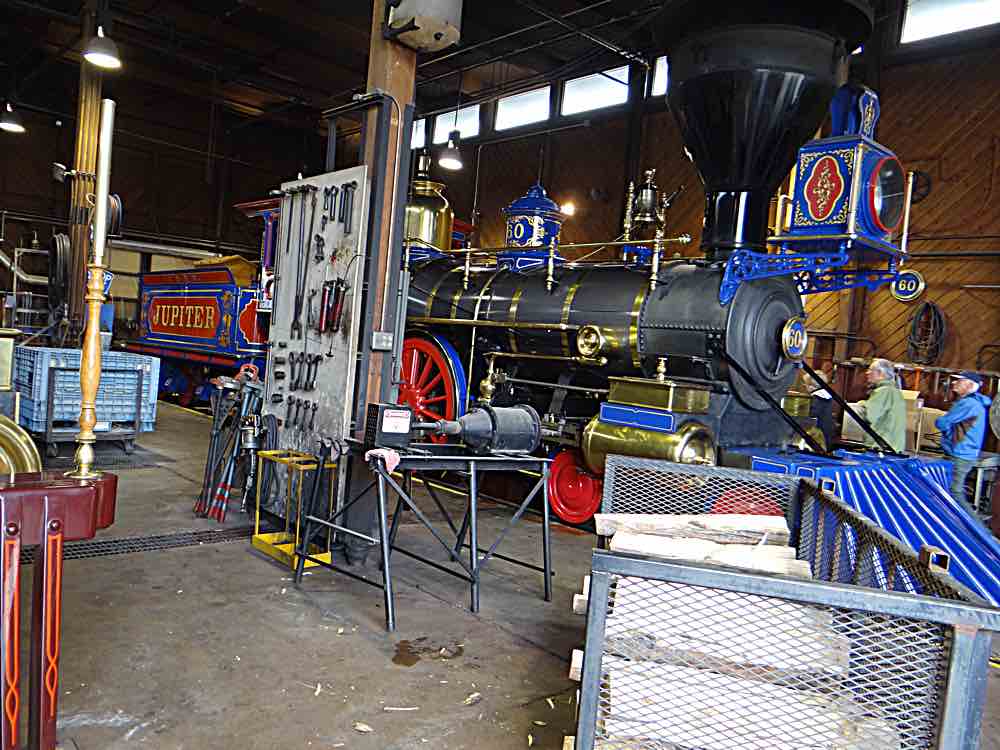 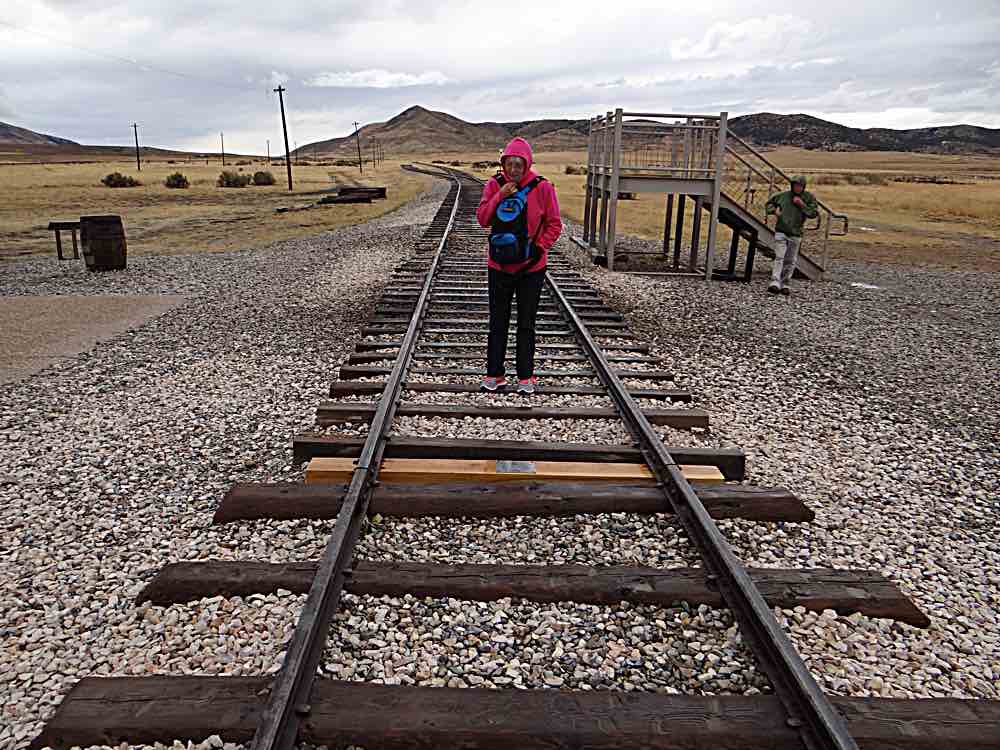 That evening, Howard Plunkett gave an outstanding presentation and overview to a “standing room only” crowd of the History of the 34th Tactical Fighter Squadron at Korat RTAFB. Howard’s presentation was followed by a moving presentation by Ed Sykes on the ongoing efforts to repatriate the remains of his Korat roommate, Dave Dinan. Several of the 34th FS pilots attended as well as the father-in-law of Captain Steve Nichols, General Frank Gorenc who retired 1 October as CINCUSAFE.

Friday morning, for our trip to the Hill Aerospace Museum, we exceeded the capacity of our 55 passenger bus by 6, having to use two cars as supplemental transportation. Again we were divided into two groups for guided tours. After about 20 minutes of answering all of the Docent’s questions, they encouraged us to continue the tour on our own.

It was an enjoyable tour with our Guys reminiscing about the numerous aircraft on display that they had flown, especially 34th TFS F-105 59-1743, in front of which a group picture was taken. Dick Heyman took the title of “most aircraft at the museum flown”, the P-38 & F-51 in WWII, the A-26 in Korea, the B-47, and the Thud in SEA, plus several others – one airplane Dick had flown, the Bell P-59 Airacomet, was not on display.

Following the museum tour, we boarded our bus for a short trip to the Bangkok Garden Restaurant for some authentic Thai food and some Singha Beer. 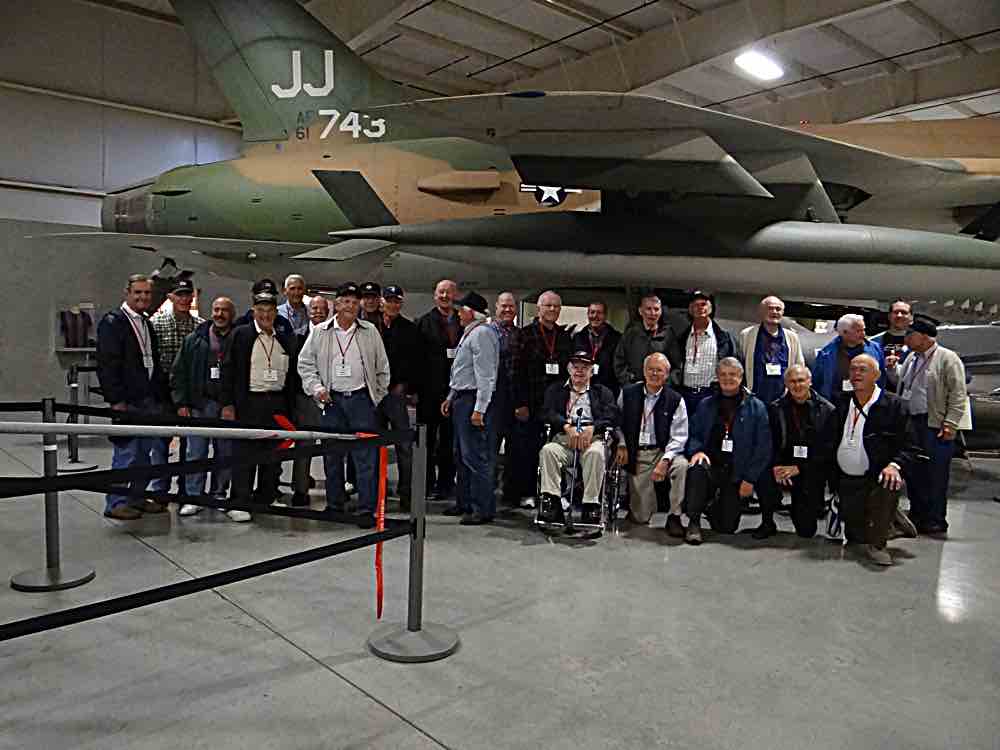 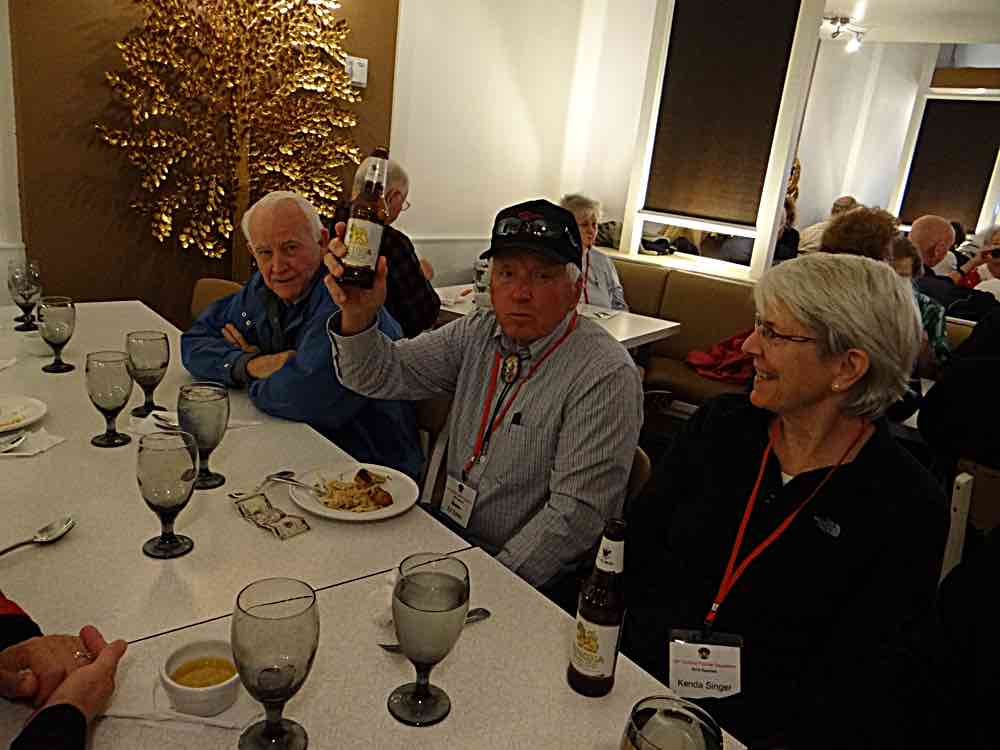 After a great Thai dinner, we board our bus (and cars) for a trip to Hill AFB for our much anticipated visit with the 34th Fighter Squadron. We were welcomed by Squadron Commander Lt. Col. George “Banzi” Watkins who briefed us on the current status of the Squadron and the F-35. Capt. Steve “Moose” Nichols, our reunion coordinator, showed us his F-35 Gen III Helmet Mounted Display and we watched a short video on the amazing unclassified capabilities of the F-35.

Following the briefings, went to the squadron lounge which is the home of the 34th TFS Heritage Collection. Many photographs, artifacts, and memorabilia from The Thud Era are on display including the 100 Mission Scarf replica. 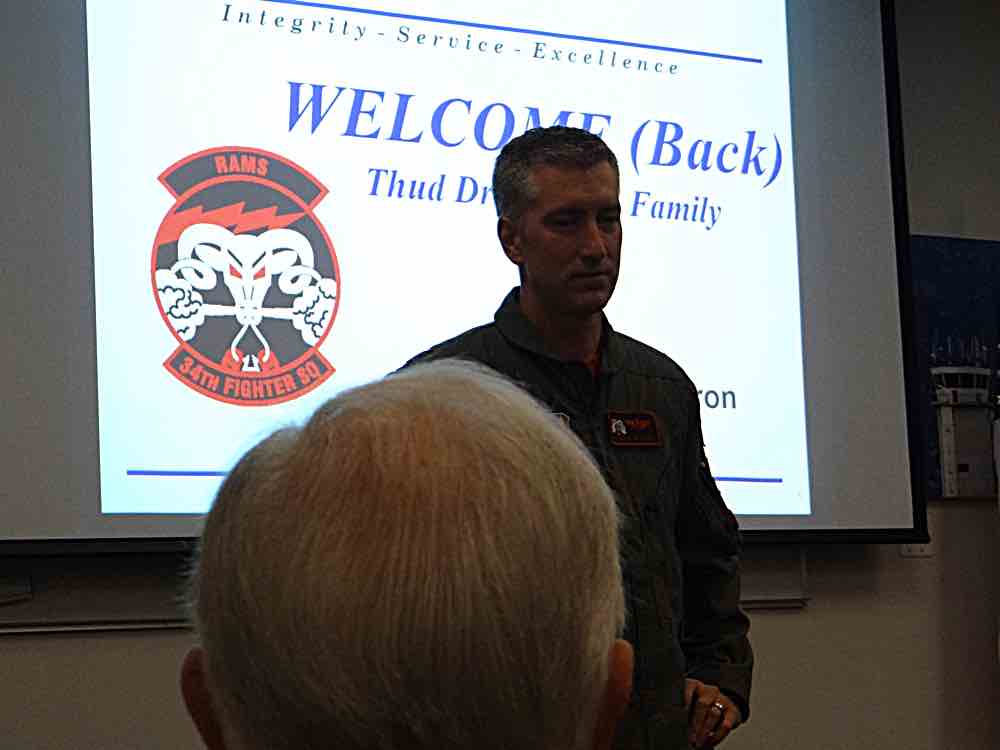 After our time in the squadron lounge viewing and discussing the Heritage Collection items, we went to a hangar where an F-35 had been setup for our viewing and picture taking. Several other of the F-35 pilots joined maintenance and specialist personnel to answer numerous questions. This was our third viewing of the Lightning II, the first at our 2010 Reunion in Fort Worth, TX; the second at our 2014 Reunion in Ft. Walton Beach, FL. 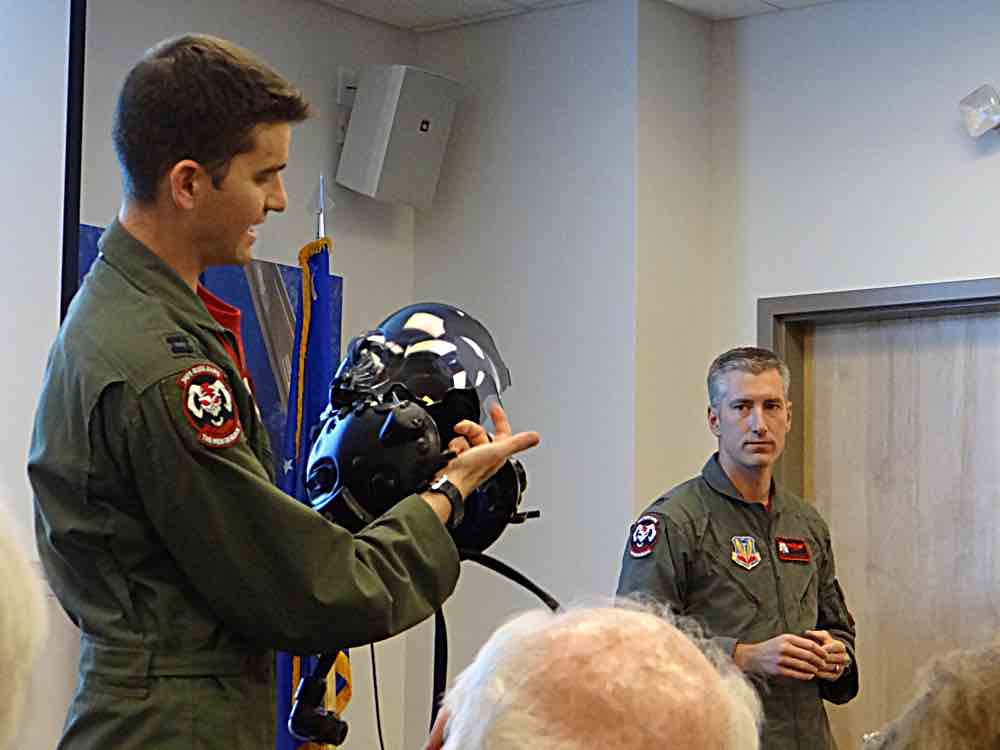 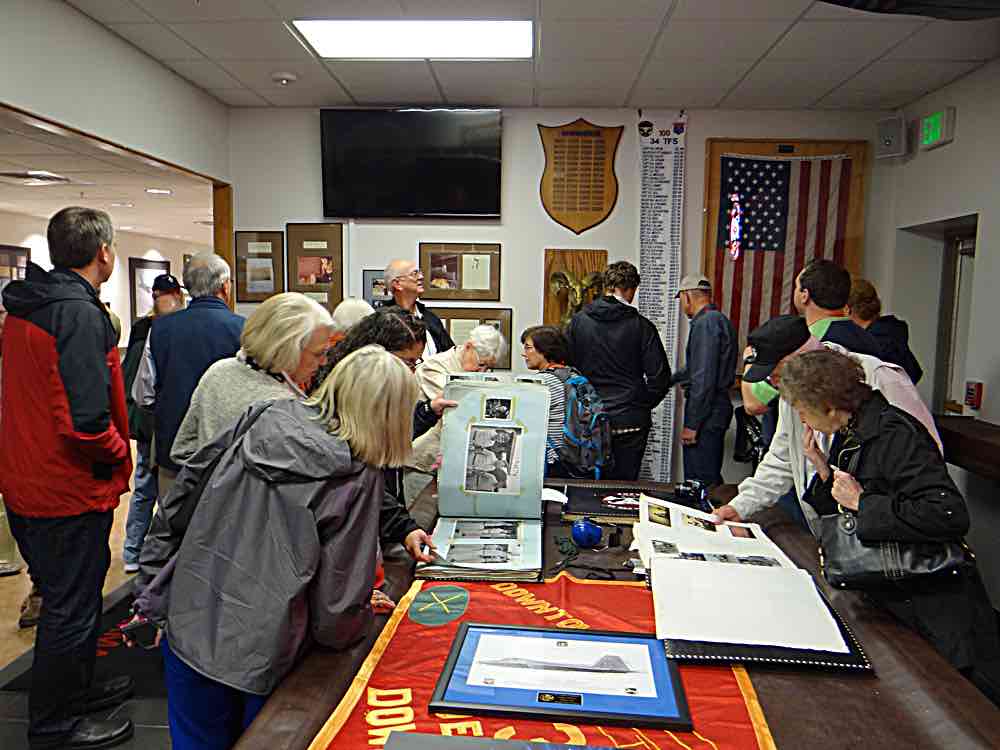 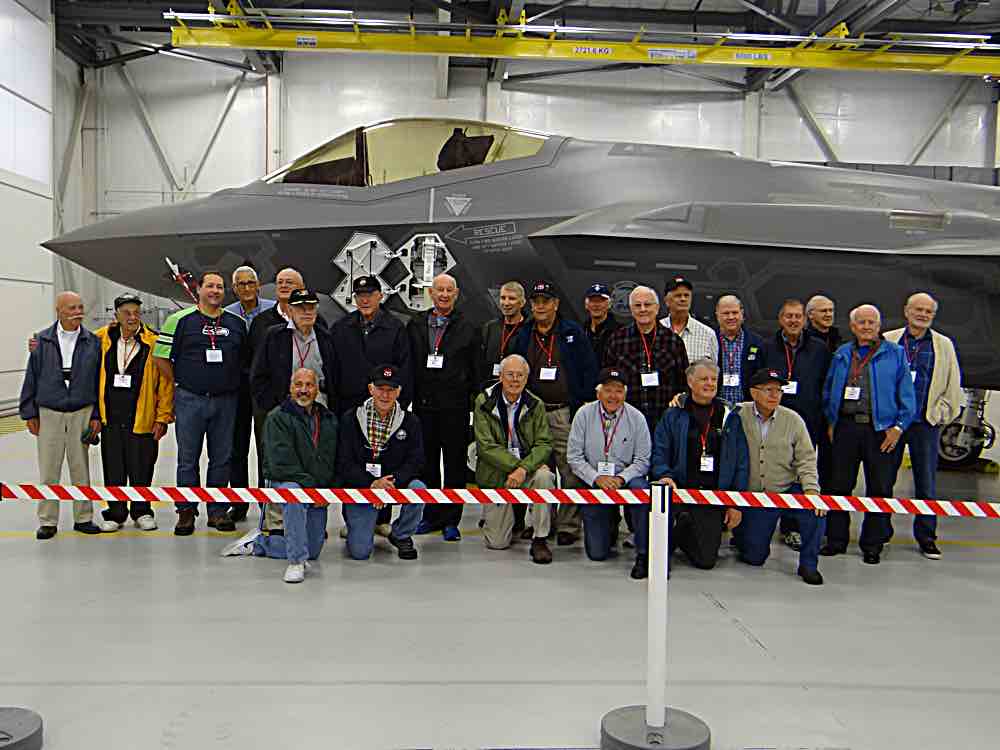 Our 2016 Reunion Banquet in the Crystal Ballroom was a grand affair. After a social half-hour, Ken Mays welcomed everyone then guests were introduced. After the invocation by Dick Heyman and the pledge of allegiance led by Steve Falls, we were treated to a delightful meal of Salmon or Pork Chops. 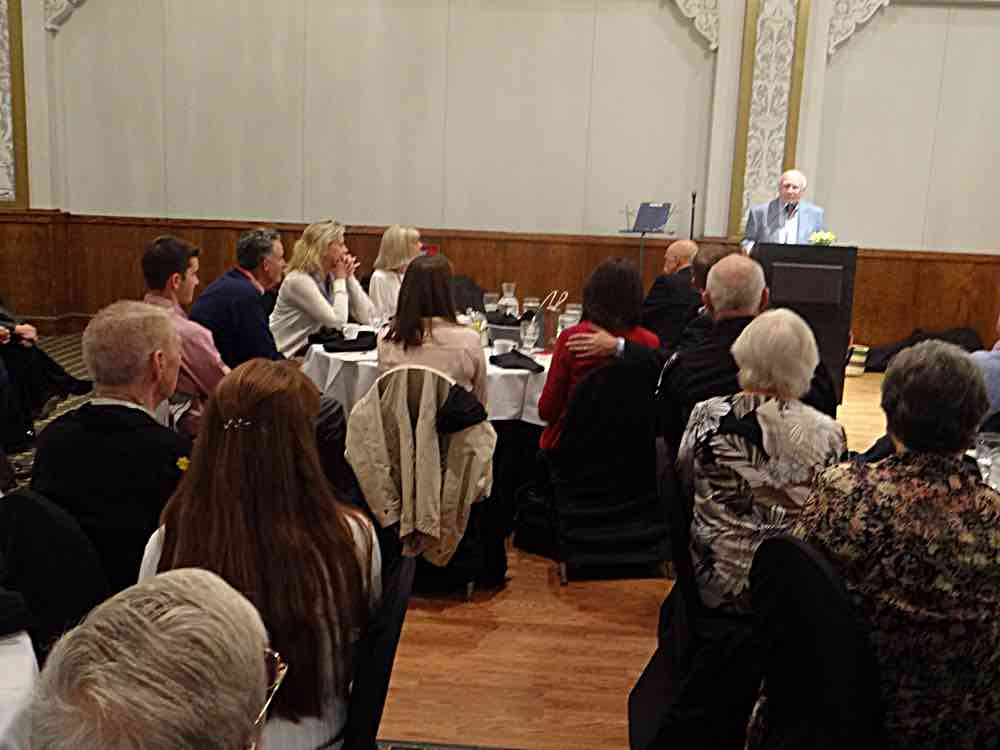 Following our meal, Joe Sechler made a very moving presentation of the 34th TFS Memorial Journal culminating in the reading of the names of our Members who have flown West. 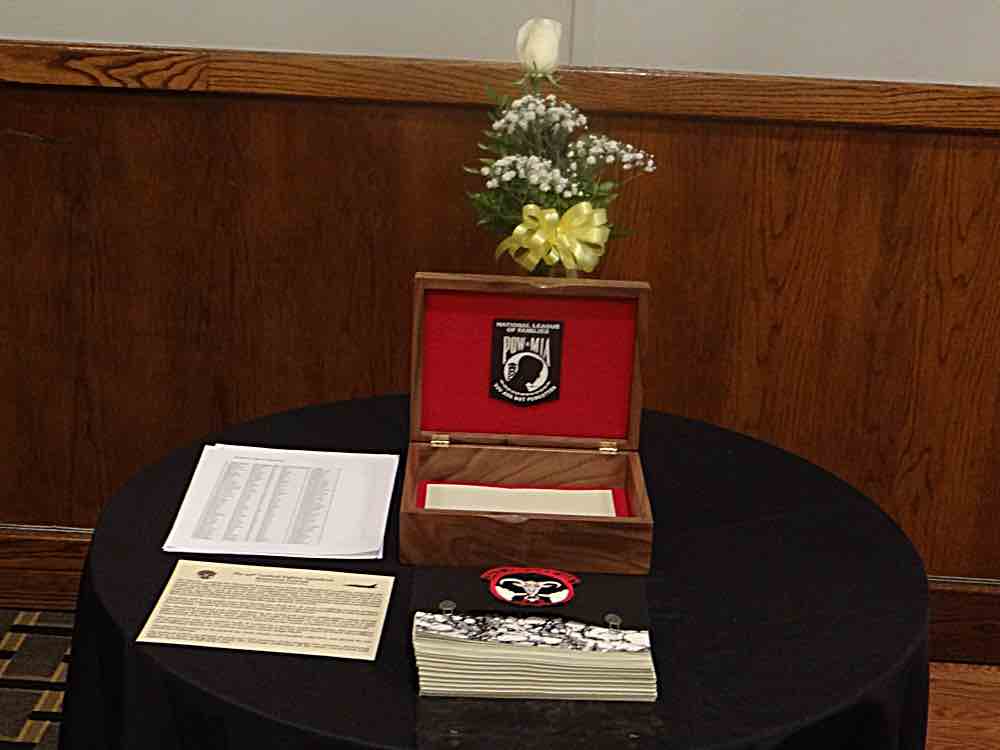 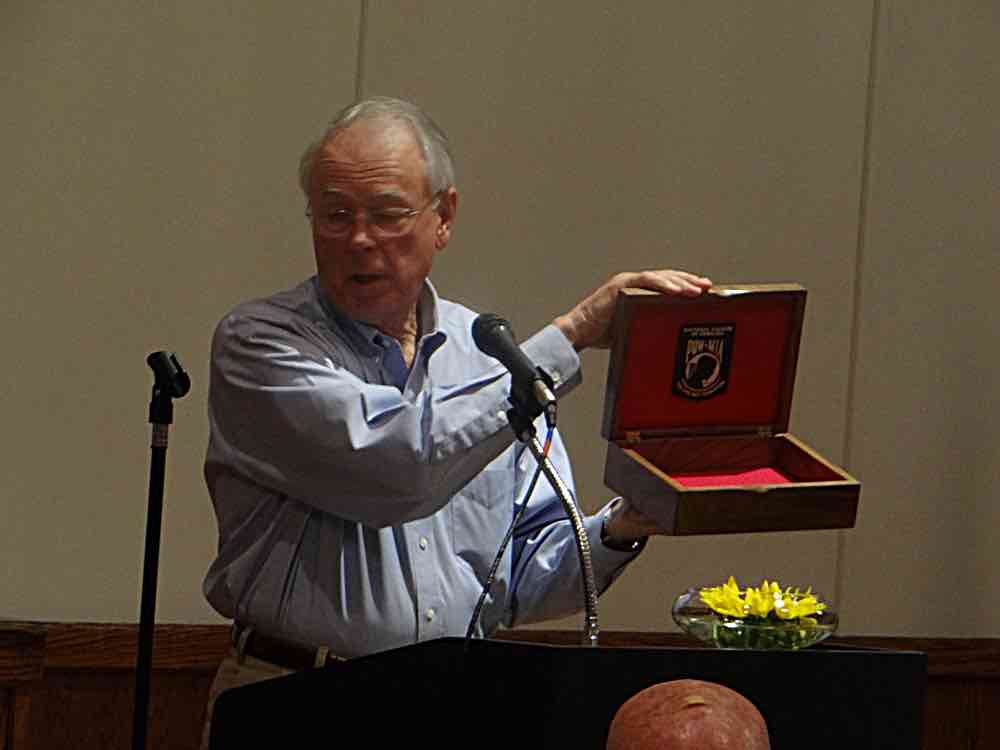 Lt. Col. George Watkins then introduced our guest speaker, Col. David B. “Detroit” Lyons, Commander of the 388th Fighter Wing. Col. Lyons praised The Thud Era pilots saying they had been and are his “Heroes”. 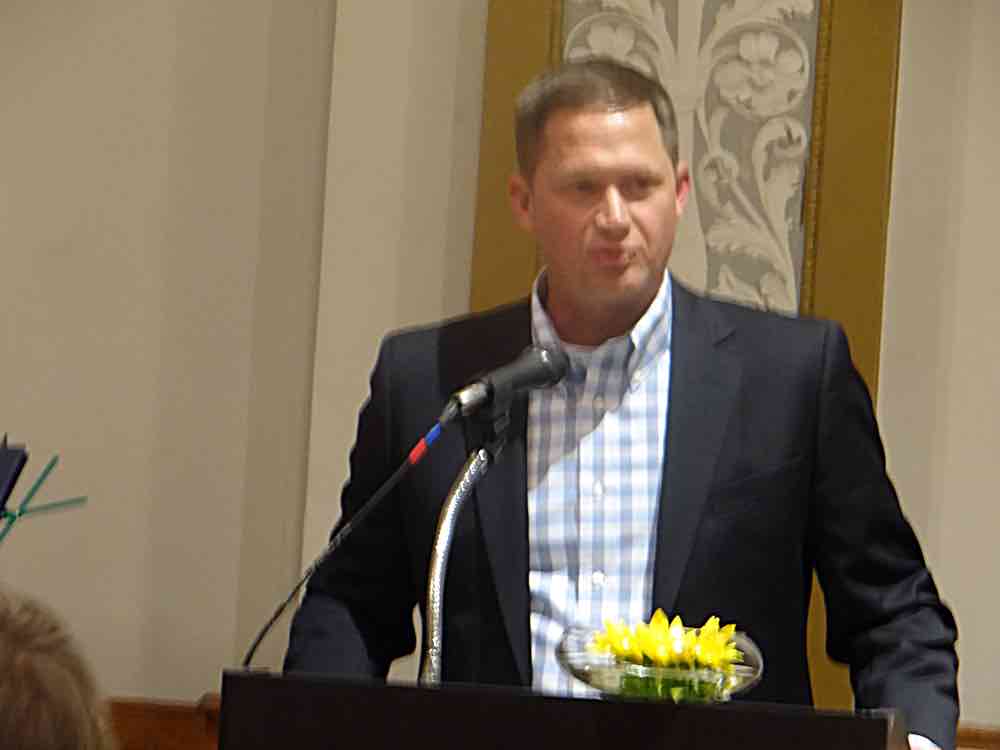 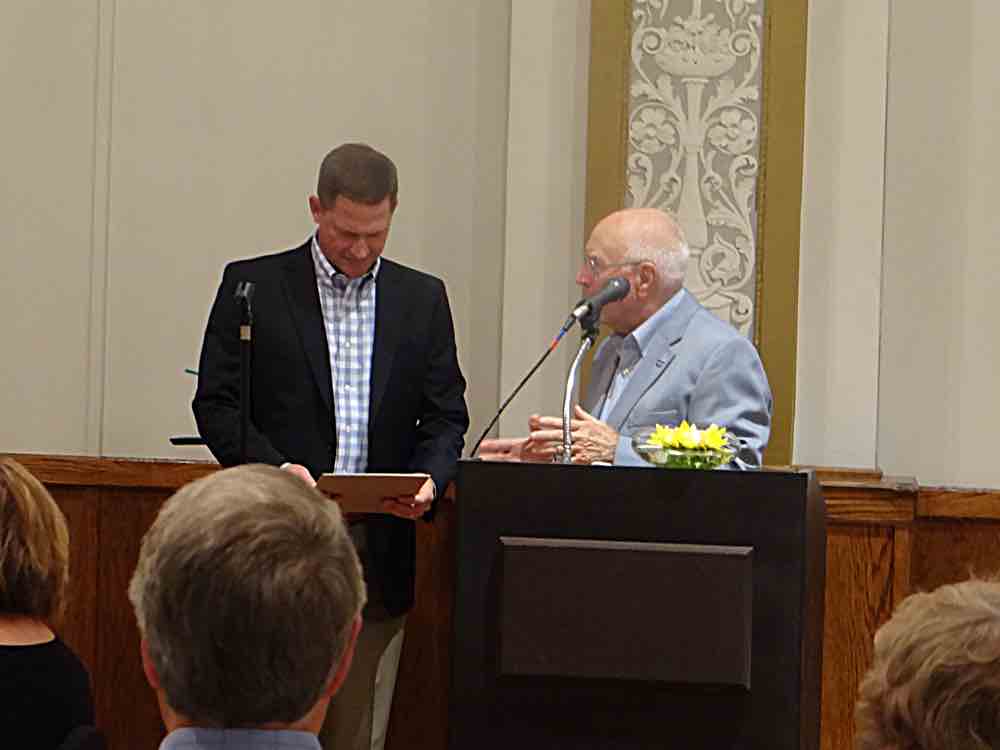 During acknowledgments and announcements, Ken Mays presented Col. Lyons with a painted 388th Tactical Fighter Wing patch from Korat RTAFB. To Lt. Col. Watkins, Ken presented one of his wooden bowls on which was engraved & painted the 34th TFS Patch. Both men were moved.

After a few announcements, Ken started the raffle with Col. Lyons’ wife Dawn drawing the tickets. Several more of Ken’s turnings were raffled in addition to a model of Thud 743 donated by Steve Falls.

All in attendance were then treated to the musical talent of our own Irv Le Vine assisted by his wife Sally during the “Sing-alongs”. In addition to his Veterinary Practice, from which he recently retired, Irv has performed internationally, often with Dick Jonas, the Pied Piper of fighter pilot music. We all thoroughly enjoyed his songs.

Shortly after the conclusion of our Banquet, our Hospitality Room came back to life with great gusto being that this was our final night. Order forms for 34th TFS Memorabilia were made available, copies of which were sent to all Members in early October.

After breakfast, a good number of us gathered in our Hospitality Room to discuss another reunion. The consensus of all present was to promote 34th TFS Member and family attendance at the F-105 Thunderchief Combat Pilots Reunion next year. Reunion dates are: Wednesday, September 27, 2017 through Friday, September 29, 2017; Location is Griffin Gate Marriott Resort and Spa, 1800 Newton Pike, Lexington, KY 40511. All of our Members will be provided more reunion information as it is published.

Following hugs and goodbyes, we departed for our homes.

A pdf version of Jake's Summary suitable for printing is available here.

Jake also provided us with this nice pdf photo album to remember the affair.

In Remembrance Of Those Who Served!

You have viewed 0% of the page